Marian Jackson, the Director of the Learning Resource Center at Tyler Junior College has been working in libraries for 41 years. This life devoted to librarianship means she's seen an unbelievable change in the role that tech played in libraries when she began her journey at Lewisville High School in 1978 to her present position. She said of that first job,

I had a phone and an electric typewriter.  My biggest decision was whether to spend money to purchase a new Betamax projector or a VHS projector.

Marian has seen it all. In 1984, while working at the library at Kilgore College, she and a computer instructor wrote a program that checked books in and out. She's dealt with the "...labor pains of pulling cable (fiber optics) in order to have email, agonized over their CD-ROM network..." and more. Marian said, 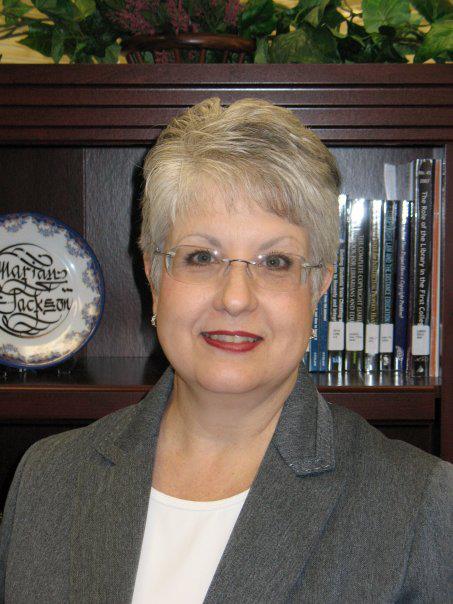 I literally have gone from checking out books with a card in the pocket and stamp as well as using the old school card catalog to doing almost everything by computer.  If a student could not physically come to the library, s/he was out of luck.

We are in the midst of moving all our resources to a cyber platform.  We are not there yet but we can see what the future for libraries looks like.

A Junior College On the Rise.

Tyler Junior College was founded in 1926 and for more than nine decades has worked tirelessly to produce exceptional graduates by offering access to quality higher education. They have been breaking records recently with their enrollments on the rise at more than 12,000 last Fall.

With all this going on, Vaughn library must provide resources to a wide variety of students, students who can be far-flung across the globe!

Springshare, nice to meet you.

In 2010, Tyler Junior College purchased LibGuides. Marian recalled that she and her Outreach Services Librarian had attended one of their first Internet Library Conferences in Monterrey. She said, "We were like rock star groupies in awe of all those folks who seemed light-years ahead of us!" They found themselves in a session where someone was "...extolling the virtues of this new (to us) service called Springshare."

Springshare, we decided, was going to fix that in new and exciting ways. We contacted Springshare and were ecstactic to learn it would fit very nicely into our budget. The rest is a beautiful love story between Springshare’s resources and Vaughn Library’s staff, working for our students and faculty. 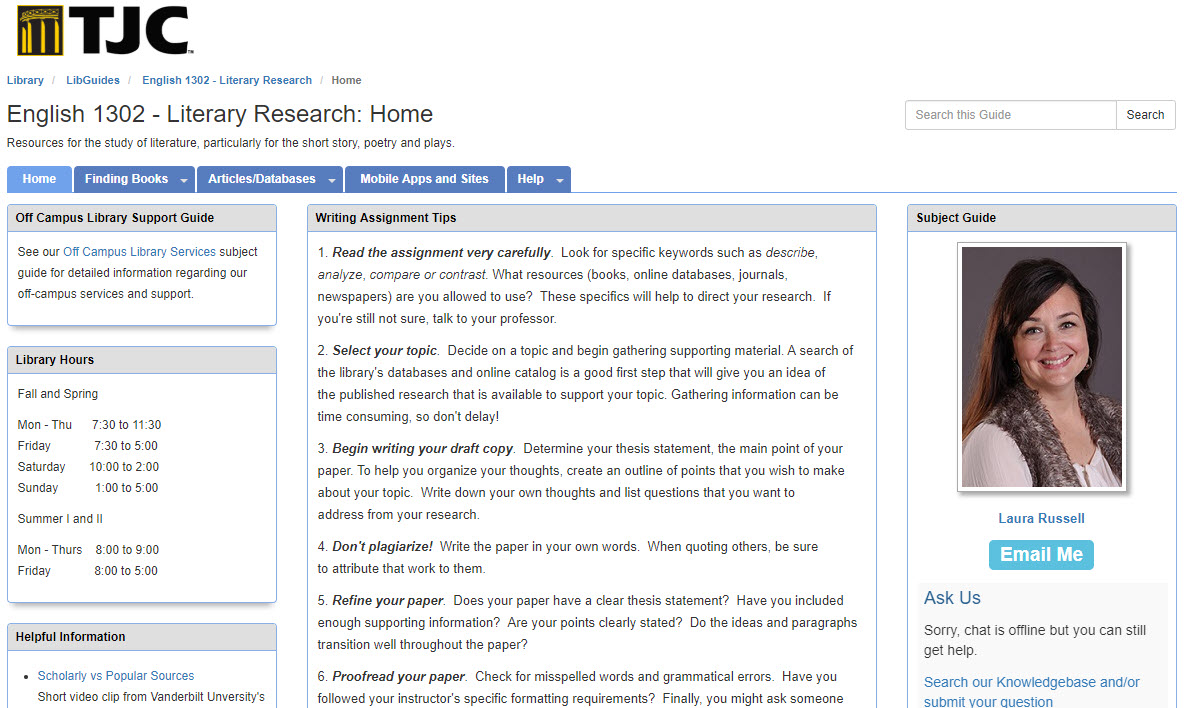 The Road to Accreditation.

To shorten a long story, Springshare was the mechanism by which we passed both affirmation visits with flying colors! In fact, one of the three librarians took down the information on contacting Springshare and intended to sign up as soon as they returned home. Thanks to Springshare, we were now the rock stars!

How Statistics Tell A Story of Strategic Planning And Advertising.

The Vaughn Library's LibGuides statistics show that both the students and the faculty at Tyler Junior College are responding well to the Library's use of LibGuides. Marian said,

The library team LOVES LibGuides as it creates a one-stop-shopping experience for our students and staff.  The faculty love it as they can embed their particular LibGuide into Canvas, our online system and because we can pinpoint exactly what info their students can use.  And, judging by the two teams here in fall 2016, accreditation folks are very impressed with how we address the library standards by using your products.

Marian and her team are diligent, focused on serving their patrons and executing their strategies.

The Vaughn Library team is invariably busy as Tyler Junior College has been adding so many new programs and certification courses. She said,

As an ex-officio member of the Curriculum & Instruction Committee, I get all the packets with details (including syllabi) on new courses and updates to existing courses.  By the time the administration is ready to announce a new program, we have a framework built addressing that program upon which we continue to add and edit with input from the instructor(s).  My OS Librarian also frequents the member pages looking for fresh ideas.  Other library staff make suggestions as well.

Having the guides ready is, again, a brilliant example of stellar planning and follow through, but advertising is often the neglected component. But not at the Vaughn Library! They have an approach for that, too.

The most popular LibGuides are the ones for Psychology and Sociology as these core courses require a research paper. Marian said,

We have noticed a direct correlation between how fewer and fewer books are circulated while at the same time usage of our LibGuides and our databases has exponentially increased.

The History. The Lodestar. The Future.

Marian grew up in a very small, rural East Texas town that did not have a public library. She attended a small, rural school whose library was pretty barren. She is now a Director at the very library that she walked into as a freshman in 1972. She recalled, "...my first thought was, I have died and gone to heaven! But very quickly on the heels of that first thought was one of utter panic: Oh my golly, how do you find anything?" She said,

As a director, I know the school districts within the TJC service area are still small; many still do not even have degreed librarians – rather librarian aides. I have as my lodestar those two thoughts as an incoming freshman – particularly the second, panic-y thought.

I want to make Vaughn Library as inviting, as friendly and responsive, and as useful to my patrons as possible. I want our students to know that if they have a question of any kind, whether it’s personal or informational or self-validating, they can find help getting those answers without prejudice and with the very best customer-service we can possibly offer.  Yes, we have been made to do more and more with less and less. That just means I have to be very persistent and very creative in getting what my students and faculty need.

We serve 12,000+ students, but we do that with a library staff of eight (yes, 8!) full-time staff, 8 part-time staff, and 8-10 student workers. We are open 81.5 hours a week 7 days a week during the fall and spring semesters. During our night and weekend hours, I cannot hire degreed librarians, so we needed some way for students to get some of their FAQs answered easily. Most of the questions come from our students. They seem to prefer using the chat box we have on each of the LibGuide pages.

Before they implemented LibGuides and LibAnswers to help service their patrons, they were using what Marian says the Monks were using during the Dark Ages -- hand-compiled bibliographies from their online catalog and email. Marian said, 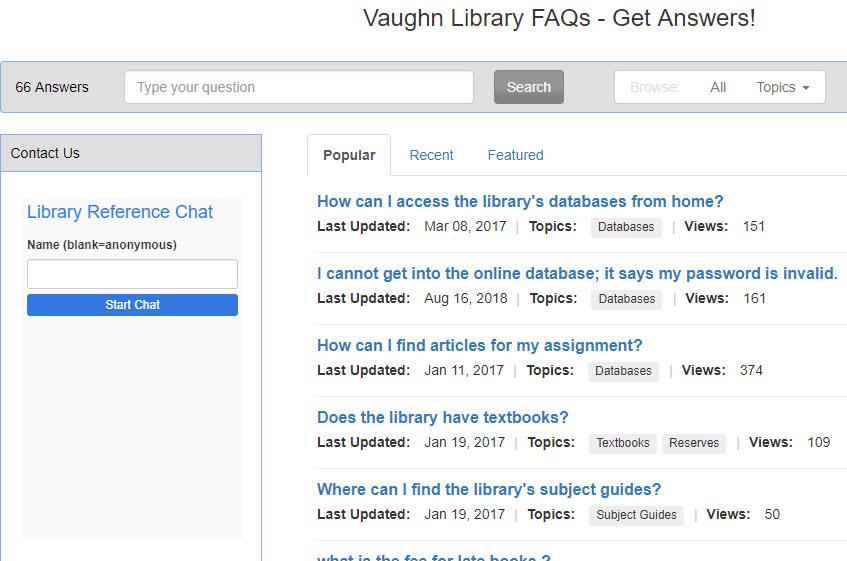 Springshare tools has allowed us to do more and more at the same time my budget is being cut, I’m not allowed to expand my staff, our FTE is going through the roof, and SACS is looking more and more closely at how we provide library resources and services. There is no doubt in my mind that we would not have received the kudos from the two SACS teams in the fall 2016 visit had it not been for what we have been able to accomplish with Springshare tools!

How honored are we to be a tiny part of Marian Jackson's 41-year career as a librarian! We salute you for keeping so close to your inner freshman, while driving the Vaughn Library into the future.