SpringyNews: A Decade Dedicated... to You!

I was in the last few weeks of my position as the director of a small university library. I recall having one or more conversations with Slaven as he considered his post- Docutek future. He was asking Docutek customers, like me, what we needed...what could help us...what didn't we have that could be of benefit to librarians and the user community.

At the time I was trying to develop a portal site for business research and it just wasn't working. I was aiming for a mix of media and resources and I didn't have the skill set to design it the way I visualized it. I shared my primitive efforts with Slaven and wrote,

if you can imagine what I am trying to do and you can make it easier for me to do this, I think librarians will find it of value.

When I moved to my new position in January 2007, I was unfamiliar with the research and instruction environment at Temple University Libraries. Librarians were eager to move paper research guides and pathfinders to the web, but were frustrated by internal rules and requirements that made it difficult to do so. Then on April 16, 2007 I received this message from Slaven: 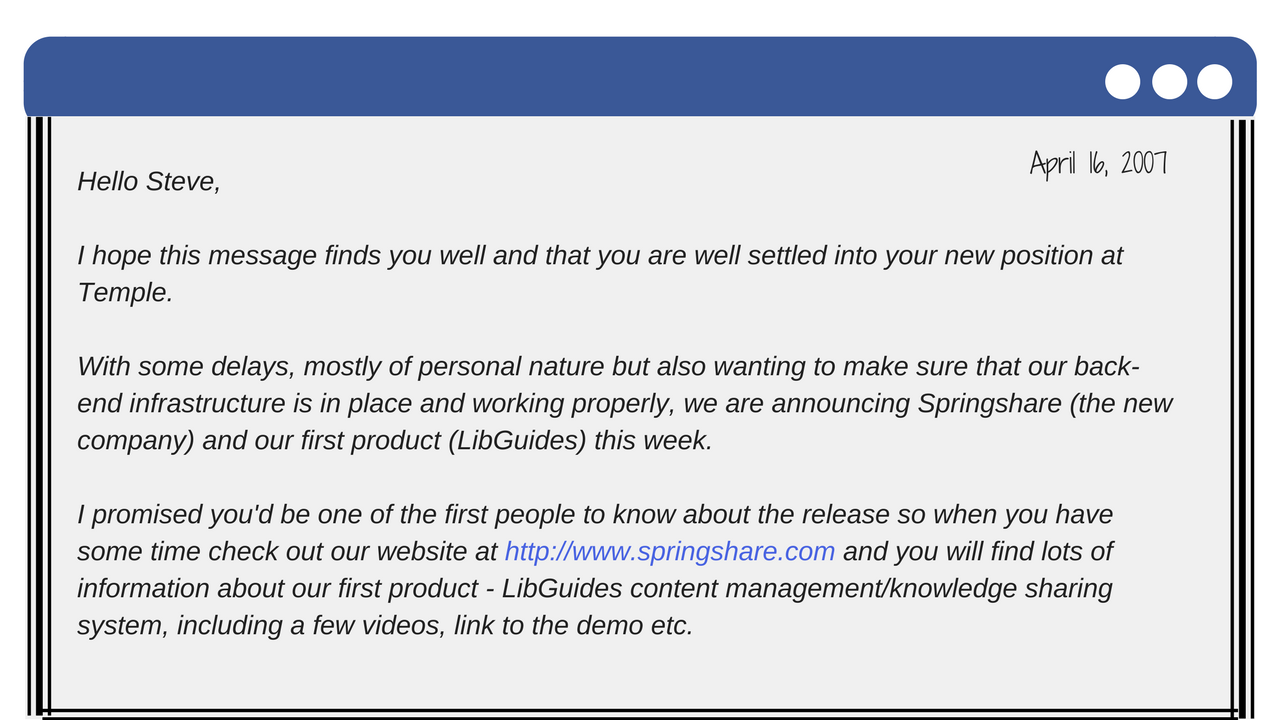 I recall being quite enthusiastic after my initial exploration of this new thing called LibGuides (was it “Lib” as in “library” or “Lib” as in “liberal” – I went with the latter). It was like Slaven totally got what I was looking for and he turned it into a viable product for creating turnkey web-based, multimedia research guides. I was still fairly new at Temple and my first thought was to proceed slowly in sharing this with colleagues for their feedback. I imagined we would want to evaluate it carefully and deliberate on this for a few months before making a decision.

That’s not what happened.

Once librarians had an opportunity to explore the LibGuides they were highly enthusiastic and wanted to begin using it as soon as possible. We had our demo site by May 1 and were a full-fledged customer by July 1, 2007.

My library colleagues felt liberated to have full control for creating and publishing their own research guides, and any success we’ve had with LibGuides since then is owing to their initiative and creativity in developing guides, primarily those that are course specific and course integrated.

Given my past experience working with Docutek and Slaven, even then I could easily describe it as the most library-friendly vendor to work with, I was convinced that doing business with Springshare would be rewarding. I think their success as a library vendor is largely owing to the support, training and orientation to developing their products as a community of customers who share resources and support each other. It didn’t hurt that LibGuides offered incredibly library-friendly pricing.

We find students and faculty are busier than ever but also having great needs for research support and assistance – and less time to spend on their research activity. Fortunately, we are busier too - so we want tools that save time and boost productivity. The big change is the move to mobile technology, so our resources need to work just as well on phones and tablets as they do on desktops. Another significant factor is accessibility. All universities are paying far more attention to universal design for learning. At the end of 2013 we had a major initiative to review and update all of our guides for accessibility compliance. This is an area where we need ongoing support from Springshare for fully accessible products, both front and back end.

As learning moves to new platforms, libraries need to keep up by having the ability to integrate their resources. Two significant LibGuide changes were the introduction of Version 2 and LTI (Learning Tools Interoperability). In addition to giving us more design features and flexibility, it also enhanced our capacity to allow for guide integration into learning systems.

It’s widely recognized that we need to be where the users are, and it’s unlikely they’ll be hunting down our guides. So getting them front and center for students where they’re already going for learning content is a high priority. Every library is also paying more attention to the user experience. Here at Temple Libraries, a team of librarians is working on guide usability and has developed a fantastic set of best practices for guide design – which builds on all the recommendations we receive from the experts at Springshare. They’ve distilled the salient usability features into – what else – a LibGuide. 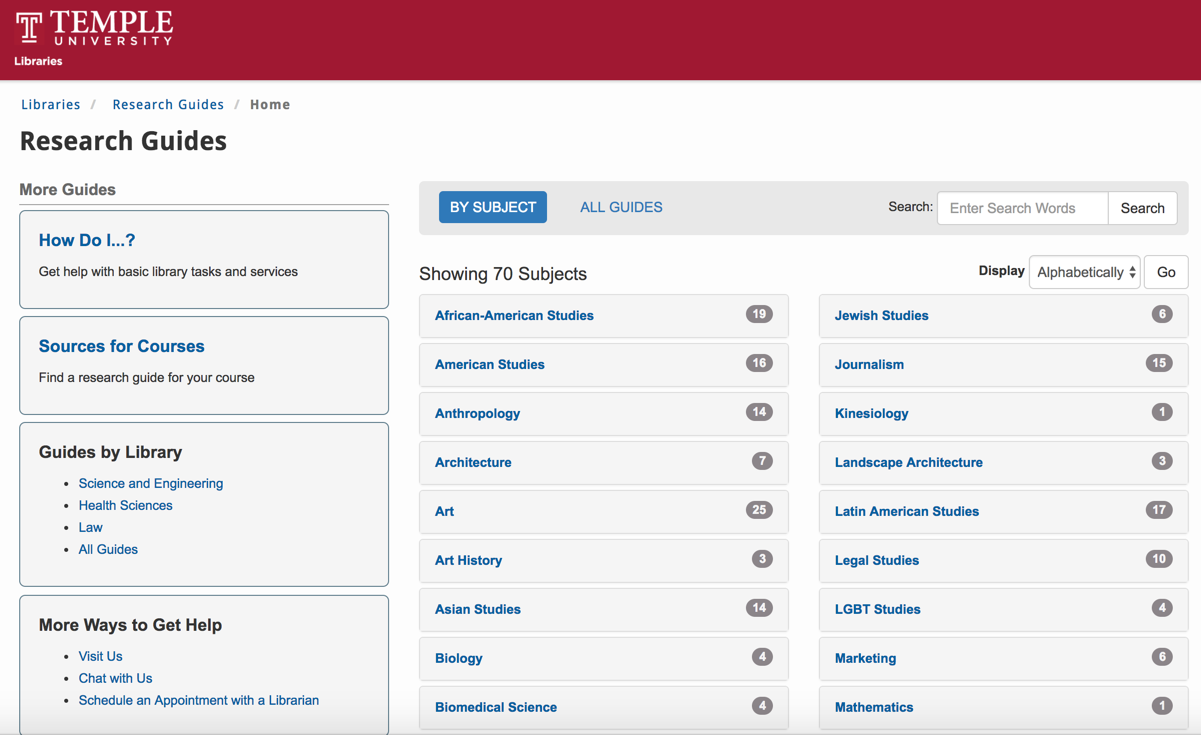 Over the past 10 years we've added other Springshare products.

Given the good experiences we’ve had with our LibGuides system, we’ve felt comfortable adopting LibAnswers, LibCal and LibAnalytics. These have all proven to fit right in with our service environment, and enable our community members to engage with us without undue complication. Springshare is generous with allowing trial periods that give us time to really test out the new products. When there’s something that doesn’t work for us, we are glad to share it and the developers want to know about it. What really surprised me is the enthusiasm with which our Computer Services colleagues adopted LibCal for scheduling all their rooms. It was like “Hey, these librarians are really onto something cool here”.

Looking back, I never would have imagined, from what Slaven shared with me way back in early 2007, that LibGuides would grow to a universe of thousands of guides across thousands of libraries, with librarians regularly and freely sharing and exchanging each other’s intellectual property.

It’s worked out so well for us, that we don’t even mind that Springshare permanently borrowed our first LibGuides guru for one of your developers. Don’t worry guys. It was quite a few years ago and we forgive you.